← Recipe: Lime Cupcakes with Coconut Frosting Sprinkled with Graham Crackers
Evaluation of Self: The Lonely Girl →

A New Era of The Church Begins; The World Welcomes Pope Francis

Today in a world of instant technology, millions of eyes were glued on a smoke stack, and when white smoke was finally seen at 2:06pm (ET)…millions of eyes were glued to the red curtains. They were not awaiting a politician or a movie star…but a religious figure. In a world where there is a drastic separation between church and state, no one questioned network TV and public radio spending hours and days covering the news of a religious event. In a world where religion often takes a back seat…this was a welcome change. 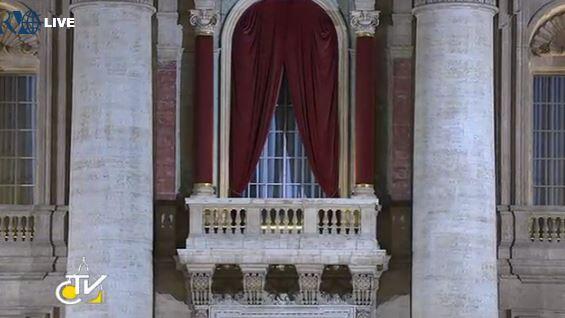 It is really hard to explain the feelings I have right now. It is just such an overwhelming feeling, I can describe it only as “epic.” This is the first year I was able to watch the beginning of Conclave and the revealing of the new Pope live and the video and pictures from the moment are so ceremonious and so beautiful, it looks likes something out of a movie. The crowd at St. Peter’s Square is filled beyond capacity. Thousands braved the cold and the rain to witness such a momentous moment in history. Once the crowd let out a roar and lights appeared behind the curtain…for those following moments, I did not Facebook, I did not Tweet, I did not text. Like millions of other people, I just took in the essence of the moment and simply watched the red curtains in anticipation for the new leader of the Catholic Church.

This was my first introduction to Cardinal Jorge Mario Bergoglio of Argentina…a man who will now forever be known as Pope Francis (the 1st). He seemed humble and very personable. It is noted that he is a known for his work with the poor and is supported among liberal cardinals. The new Pope asked the people of the world to pray for him and there was a hush among the crowd and it is hard to fathom the sense of overwhelming prayers that were offered in living rooms, in cars, at work…from people all around the world.

I don’t know how non-Catholics view this moment and I am sure some don’t understand the reason why a man is being revered my millions. But as  a Catholic myself, I feel like this is the moment the Church needed. All the reporters kept proclaiming how the Church is at a crossroads, and it is very true. I don’t think it was coincidence that Pope Francis is the first Latin American Pope and I hope the new Pope is able to guide The Church into the modern world and that he will be able to address issues, such as women leaders in the church, homosexuality, and  the decline of Catholics around the world. Being Pope is no “dream job.” Pope Francis, from this moment to probably the day he dies will be the spiritual leader for about 1.2 billion Catholics around the world. Everyday for the rest of his life, he will “learn the sorrows of the world”…he will not only have to have a “special depth of faith” that few men can handle, he will also have to govern and appoint necessary leaders to help guide and strengthen The Church. And the Catholic Church is not just “a” church, it is “the” Church which has been established in tradition going back centuries, is the beacon of faith for people from the Americas to Africa to Asia, it leads the rich and the poor, the young and the old. Tonight, regardless of the color of their skin or the language of their land, millions of Catholics will pray in solidarity for the new Pope, and I will be one of them.

NOTE TO READERS: I do NOT usually write religious based posts and will probably not write very many. While I always welcome any new followers, I wanted to put out this disclaimer for anyone who decides to follow this blog, based on this religious content…otherwise you will be a little “shocked” to read what email notifications you will be getting. 🙂

Ksoranna is the ideal version of myself. She is me...but better...smarter...funnier...sexier...
View all posts by ksoranna »

← Recipe: Lime Cupcakes with Coconut Frosting Sprinkled with Graham Crackers
Evaluation of Self: The Lonely Girl →