The Taste of Lemon and Grape 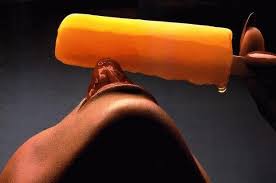 As this summer draws to an end, others will think of bar-b-ques and poolside drinks and sand in between their toes. I will only think of him and the taste of lemon and grape popsicles melted on my tongue. I still remember when my friend first bought them for me. I did not put popsicles on my grocery list, but she told me, “you are gonna be so glad to have them on a hot summer day.” Little did I know how right she would be. Indirectly, I have her to thank for sticky sheets and sweaty thighs and satisfied smiles…as I strolled into work late with my purple tongue as a reminder of what he tasted like.

He was the grounds keeper for the apartment complex. I was the sexy, single female who liked to water the plants on my balcony with nothing but my t-shirt and panties on…and sometimes with a lucky frozen fruit bar in my mouth.

It started with a favor on how to care for my plants. It ended with the taste of lemon and grape intertwined with each breath I took and every moan I released. I sucked on the tip of a frozen treat as he sucked on my nipples…until they stood erect like brown pyramids against the sandy desert of my skin. He used his tongue to taste me from my chest down to my navel, as I used mine to lick the juice dripping down the sides of the popsicle, like it was the sweat rolling down his abs.

He buried his head in between my thighs and proceeded to do a taste test of the pussy that was spread out before him.  With the flat part of his tongue he stroked the entire length of my cleft. He sucked on my plump pussy lips till my thighs shook from the pleasure. He licked the juices flowing out of me like nectar from a flower, as I licked the melted sweetness dripping down my hands. He suckled and slurped me as if I tasted like the frozen lemon drop he finished minutes before he undressed me.

I fed him pussy with each thrust of my hip and he took in mouthful after mouthful. I tried to finish my frozen fruit bar before he finished me but I could no longer concentrate on the sticky sweetness which had melted all over my hands and mouth. He stroked my insides with his fingers as he sucked on my clit until I screamed out his name and begged him to stop.

As my pussy continued to pulsate, he kissed me with lips overworked from natural desires. He tasted of my orgasm mixed with a lemon tongue and I tasted of grape soda. His tongue was hot from my heat and I tried to cool it off with a tongue drenched in a frozen treat.

And so my summer began with the taste of lemon and grape. And in this way, it continued on… as I bought lemonade and grape frozen fruit bars,  2 and 3 boxes at a time. This past summer sure was a hot one …thank goodness for frozen popsicle treats.

Letter From the Editor: Sorry for my Absence and Sometimes Love Really Does Last a Lifetime

Until then… I will leave you with some pics that always makes me believe in finding love again and with the hope that sometimes love really does last a lifetime.

You are never too old to find the the one!

This story is my favorite!! The man is 104 years old and his wife is 100 years old. They have been married for 81 years. They are very poor and he has never seen his wife in a wedding dress, so when this picture was taken, it was the first time she wore one. They were both so overwhelmed. He hugged her and said that she is still beautiful to him. 🙂

Posted in Love Out Loud, Make Me Human